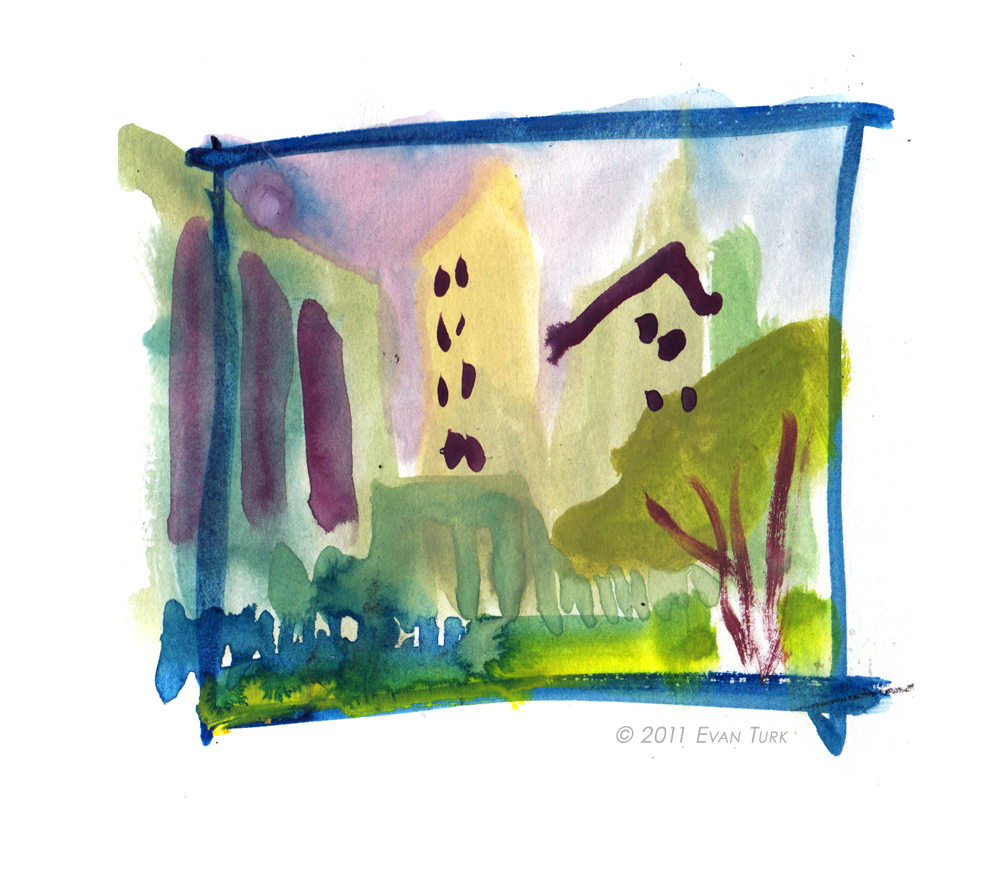 Today was the first day for gay marriage in the state of New York, and I went down to the City Clerk's office in Lower Manhattan to draw the event. An hour and a half before the office opened, the line was already down the block, so I squirmed my way to the front to get a peek at who was going to be the first legally married gay couple in New York. 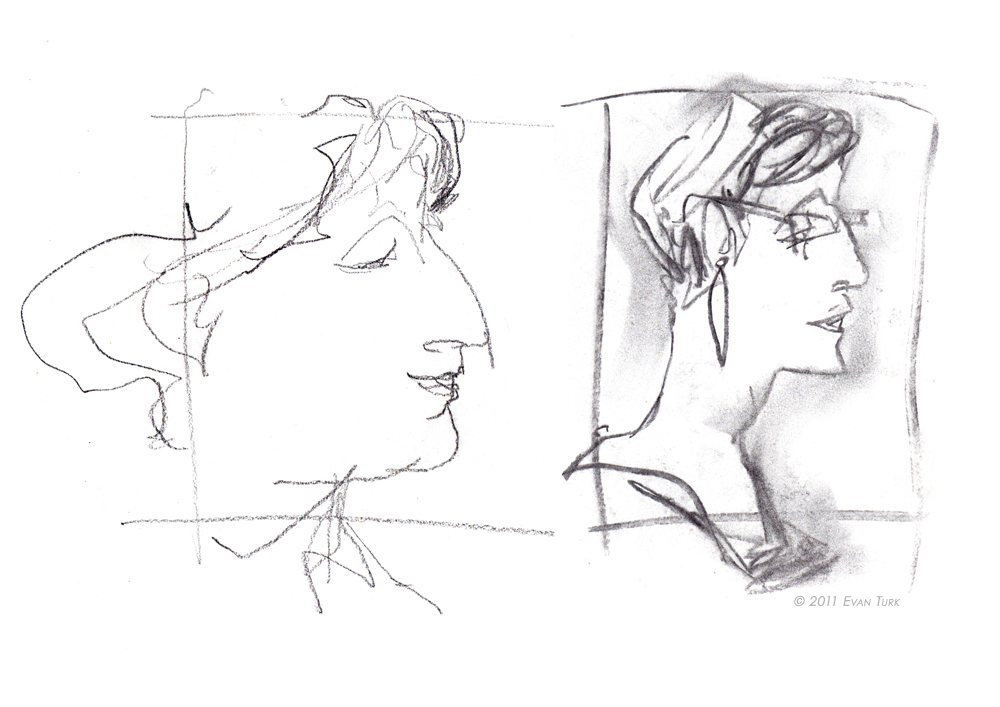 I arrived to find that the two women in front, Erika and Yolanda, were not a couple, but two friends waiting for their partners to arrive. 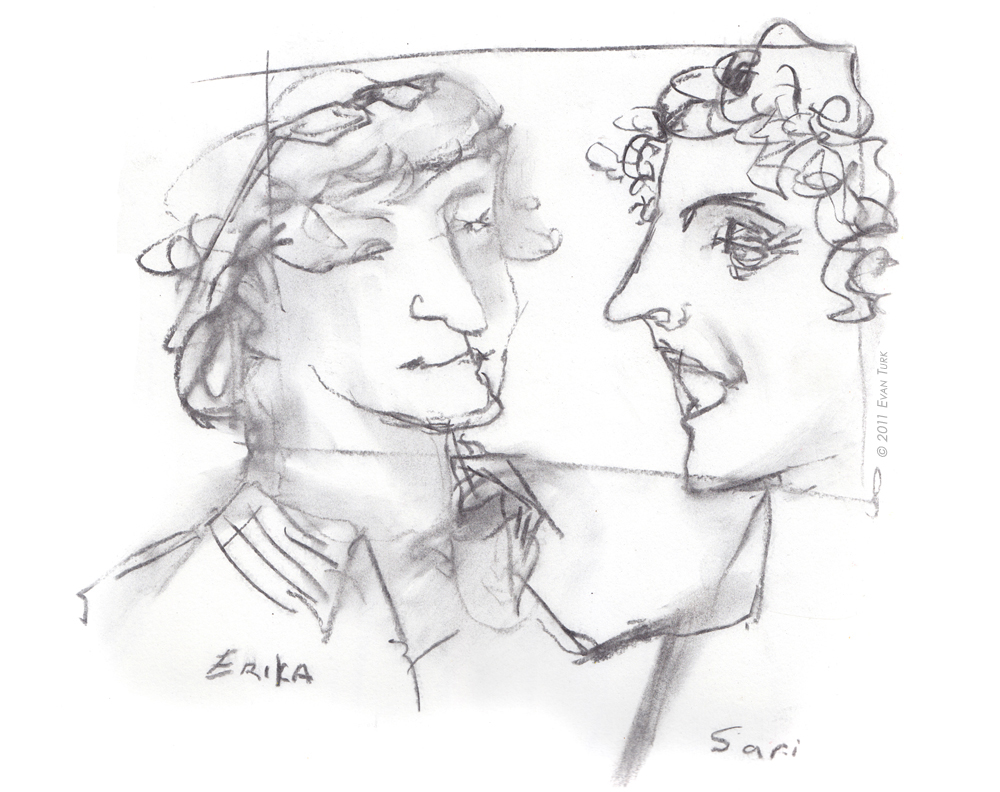 Erika's partner Sari arrived fairly quickly, and the two had a sweet, tearful "reunion". But Yolanda's partner, Nancy, was still on her way, and she was starting to get nervous she wouldn't make it with their children before the doors opened. 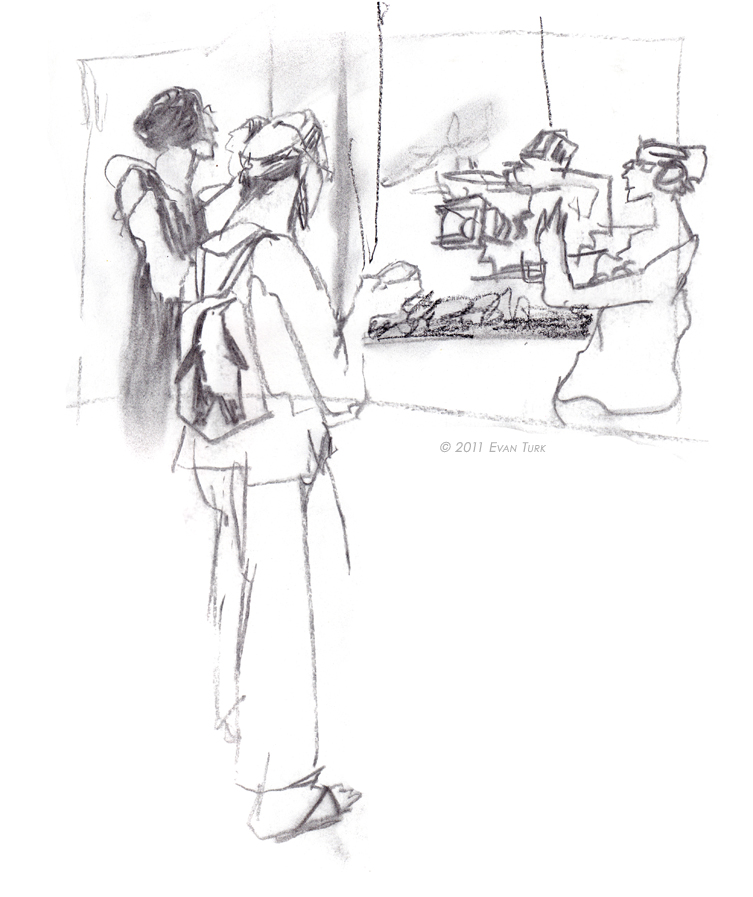 She texted Nancy nervously as countless TV crews interviewed the three women, wanting to get a word from the first in line. 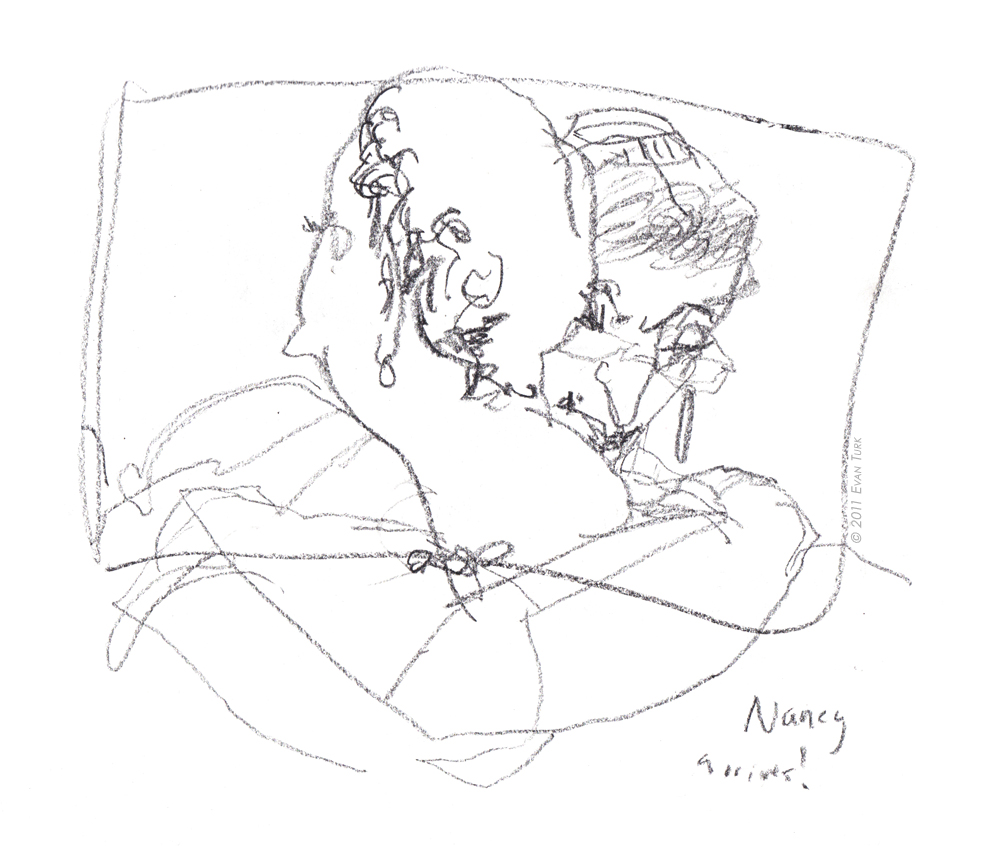 Finally, after working her way through the barricades and police officers, Nancy found her way to Yolanda and the two embraced as Yolanda burst into tears. To me, this was the most beautiful moment of the entire day. It was so touching to see a couple, that had already had their more symbolic wedding in 1997, still be so overwhelmed with emotion on this day.

To me, that shows just how important marriage equality is. It's not the certificate, or the benefits, or the political implications of it all. I think what matters is finally being able to say "wife" or "husband" about the person you love without hearing a little voice whisper "less than" or "not quite", even when you know it's not true.

The event organizers began saying that the first couples would be going in soon, so I raced around to the other side of the building to where they'd be making their grand entrance as wife and wife! 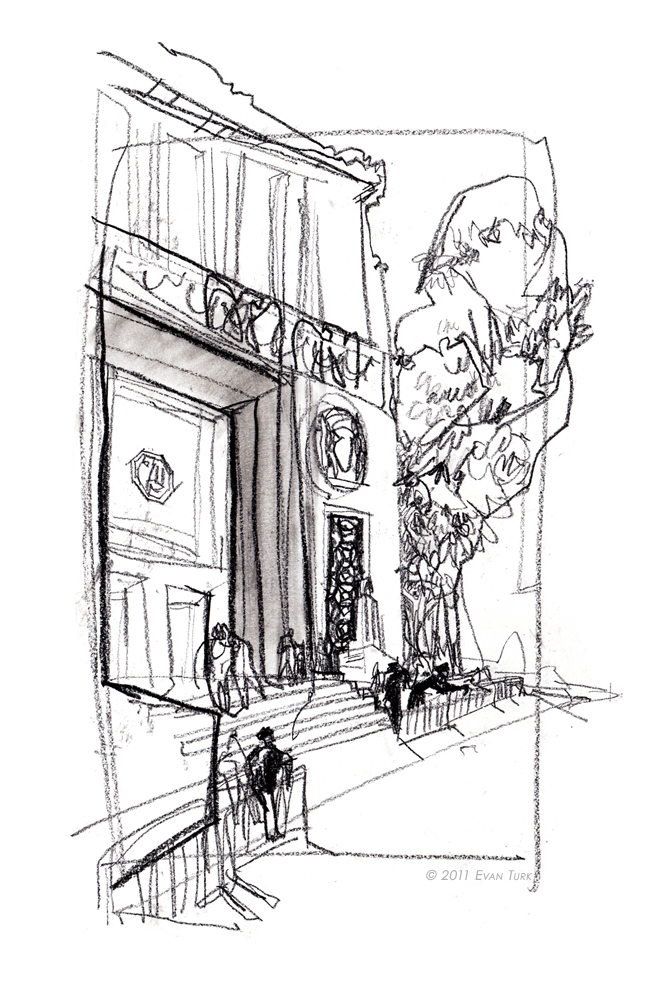 Two women burst out of the building smiling and laughing, to a roar of support from the crowd. Apparently, though, these were not really the first two women married in the city...the first two, were just taking a little longer to get out. 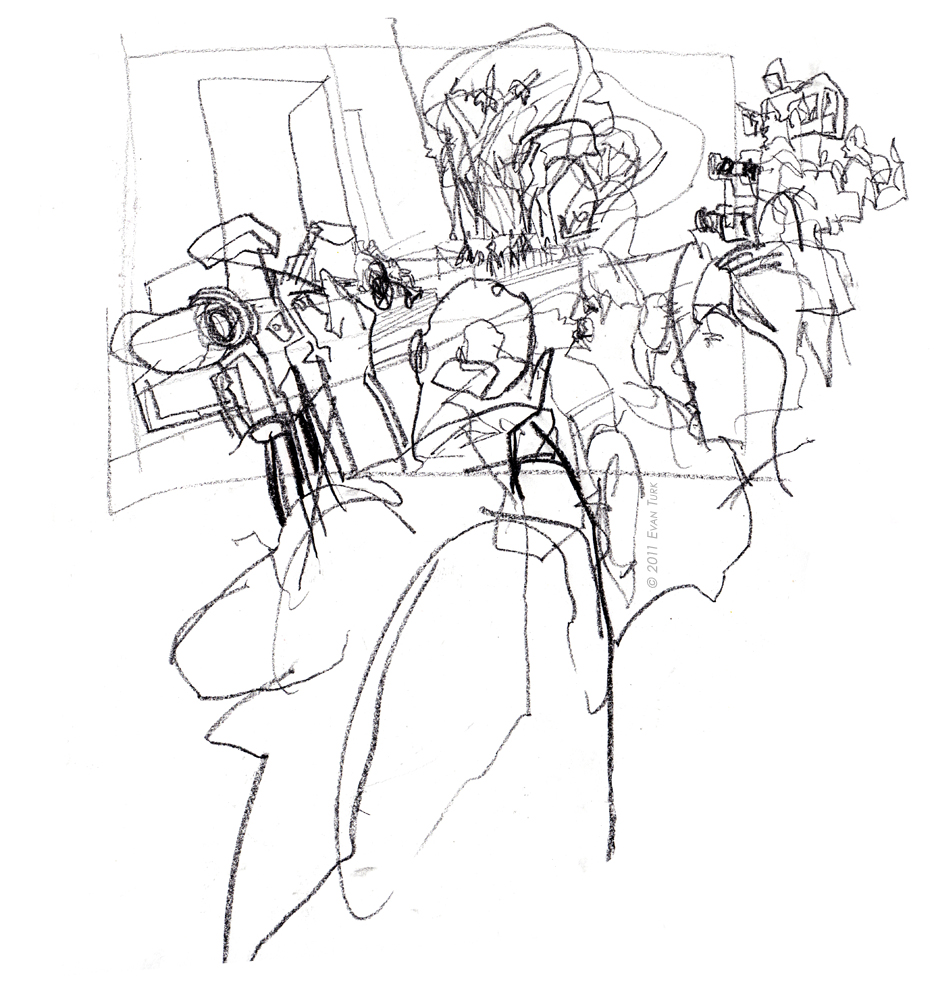 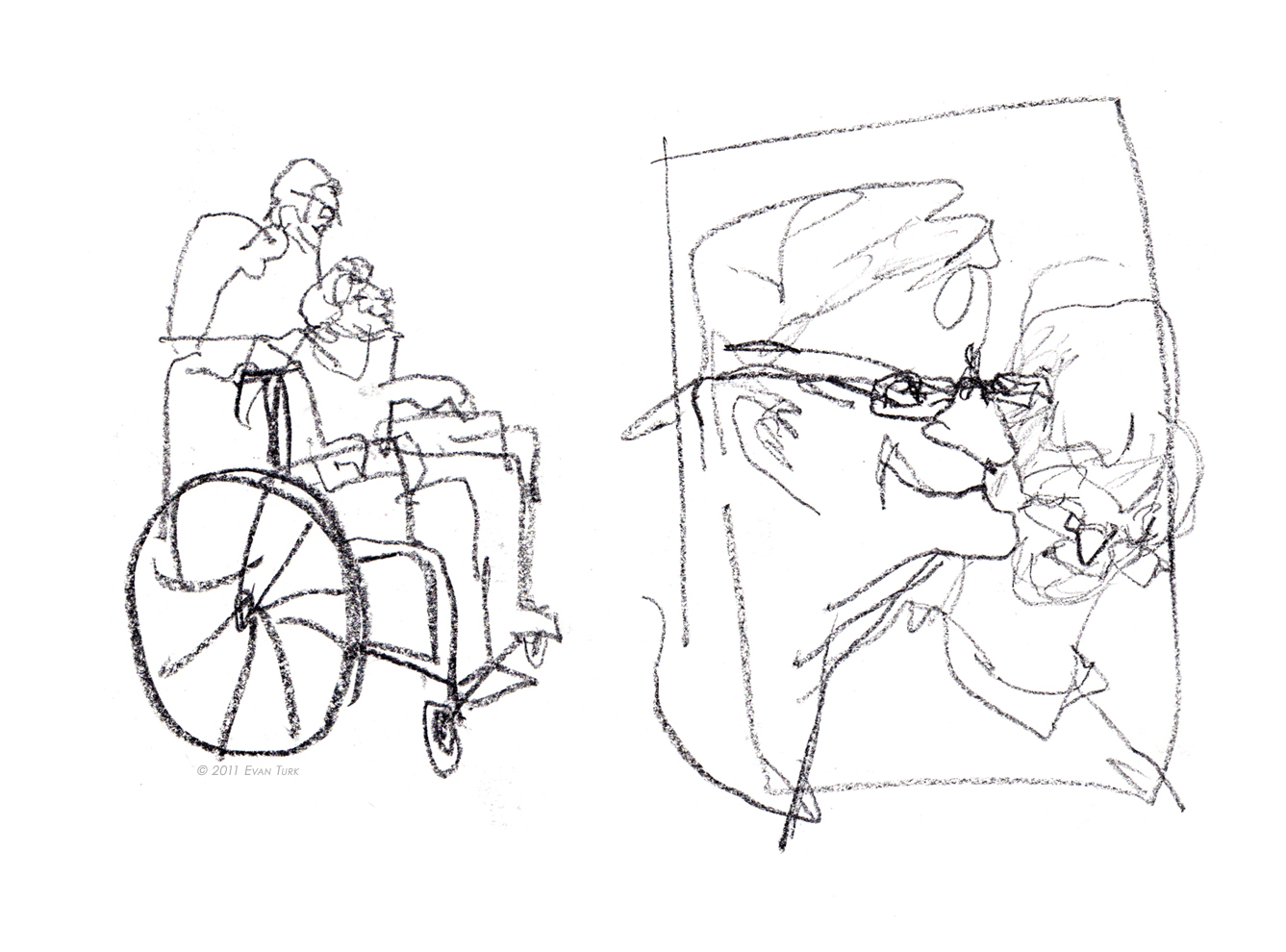 Then, to an even bigger roar, Phyllis Siegal, 77, and Connie Kopelov, 85, came out slowly, with Phyllis pushing Connie's wheelchair. 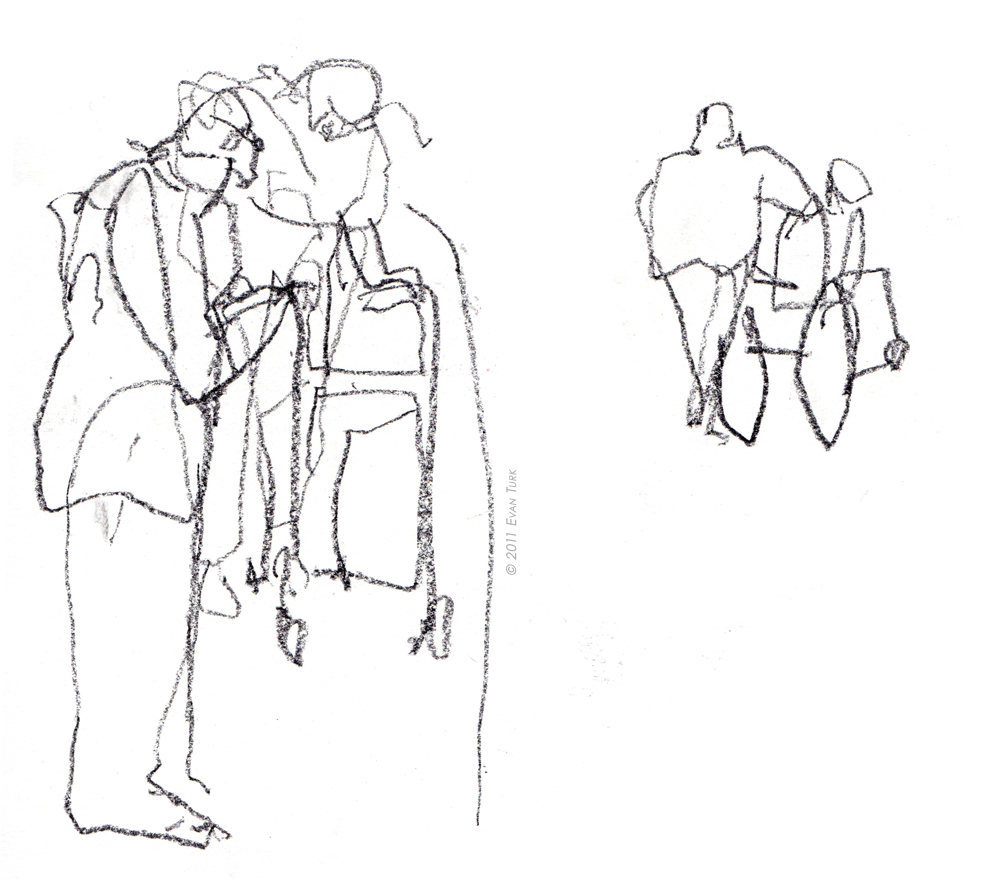 She helped Connie to her walker, and the two, who had been together 23 years, stood at the microphone in front of the press, and showed their certificate proudly (we in the non-press audience couldn't hear what they were saying). 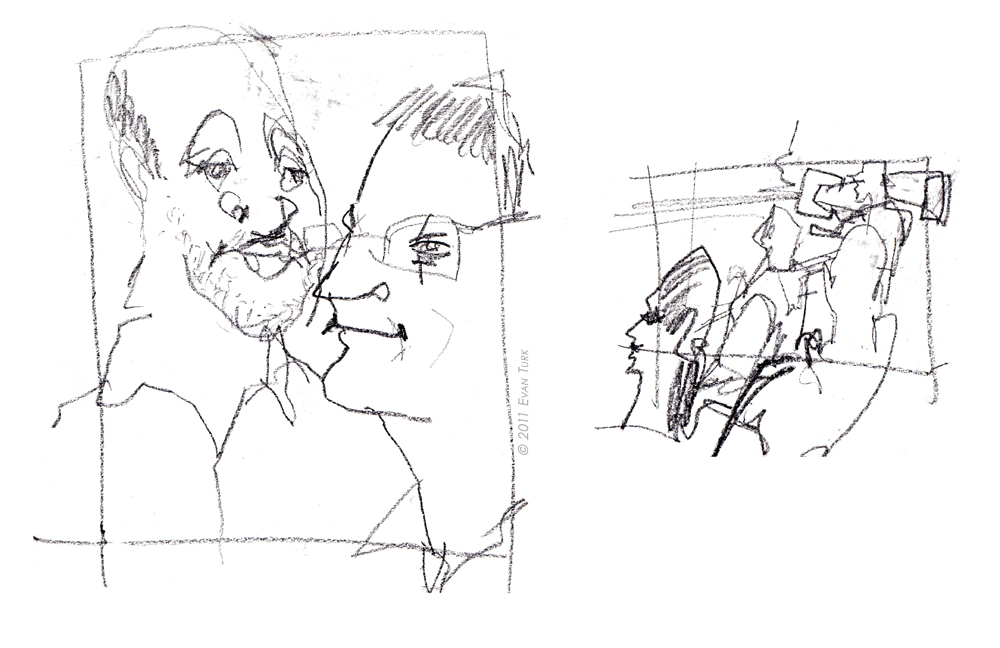 More couples came out of the doors, happily waving to the crowds as supporters threw rice and glitter in the air, and shouted even louder congratulations any time a protester tried to spew any hate. 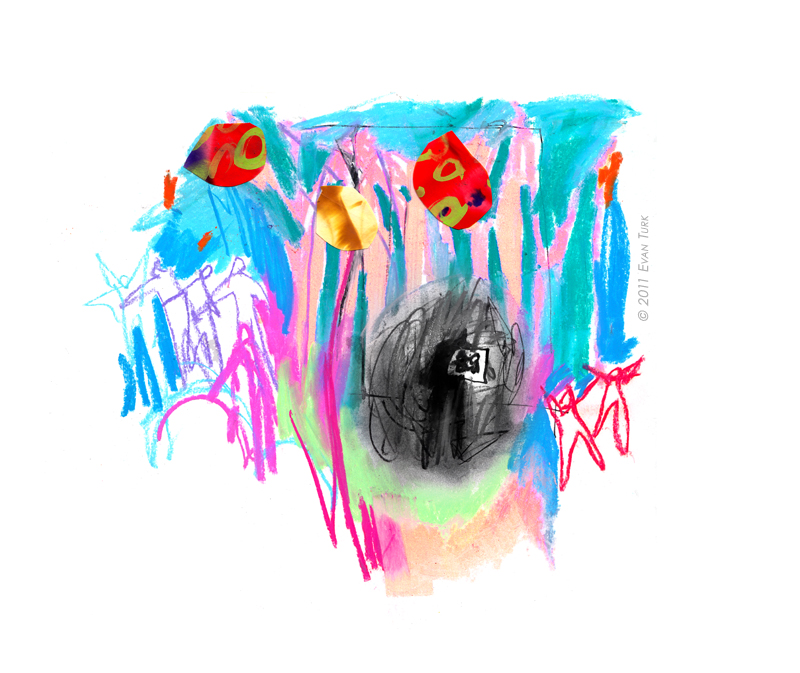 Ah the protesters...I was unsure whether I actually wanted to include them in this reportage, because I feel like it's not even worth engaging their negativity. But I decided it was still an important part of the event, and illustrates the need for this change all over the country, so I did one little drawing. Fortunately, at their strongest, there were only about five protesters at a time. Usually, it was just one angry man with a sign across the street from the building, shouting horrible things all day long. I don't even get angry with them anymore, because to me, it's only themselves they're hurting on a day like today. These people in line are having a wonderful day, marrying the people they love to overwhelming support, and all this man gets to do is stand in one place, shouting awful things, and being ridiculed by passers by. They're not worth getting angry at; they've got plenty of anger themselves. 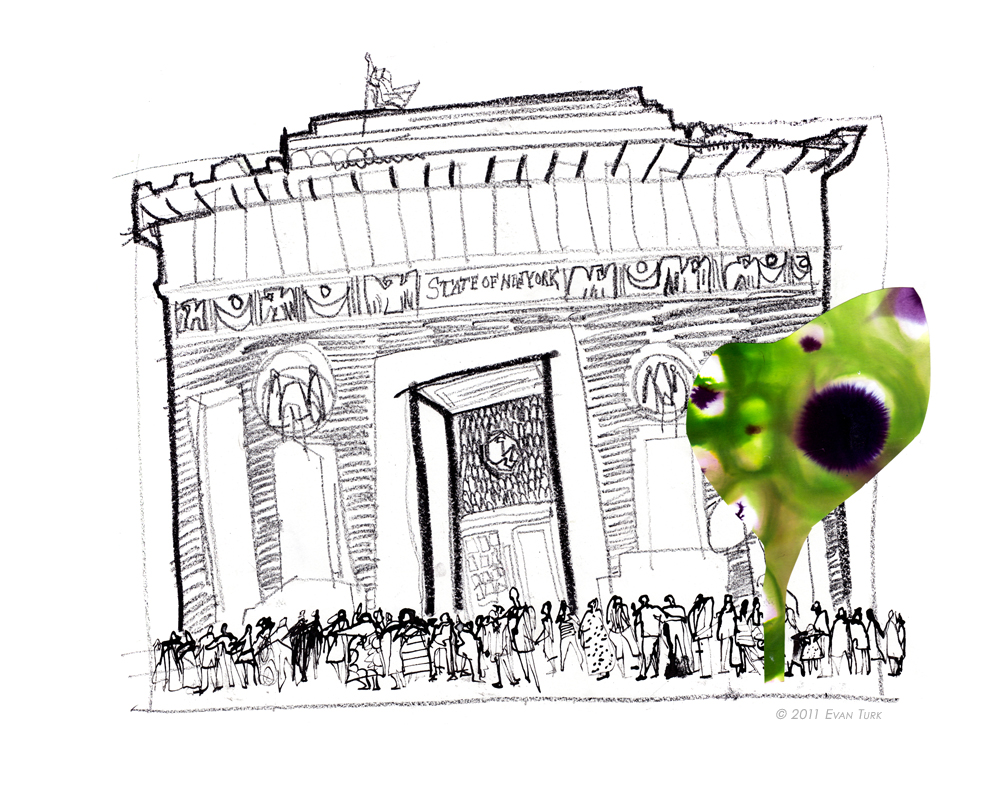 The rest of the day was an enormous line of people, wrapping their way around the building, waiting for their chance. 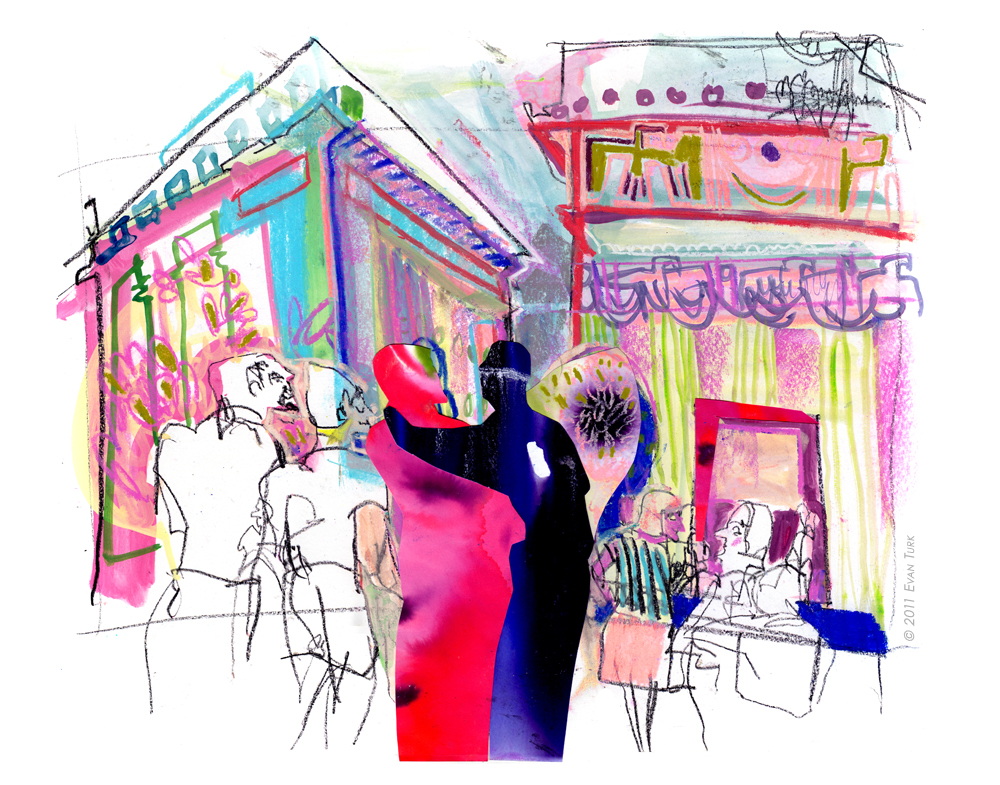 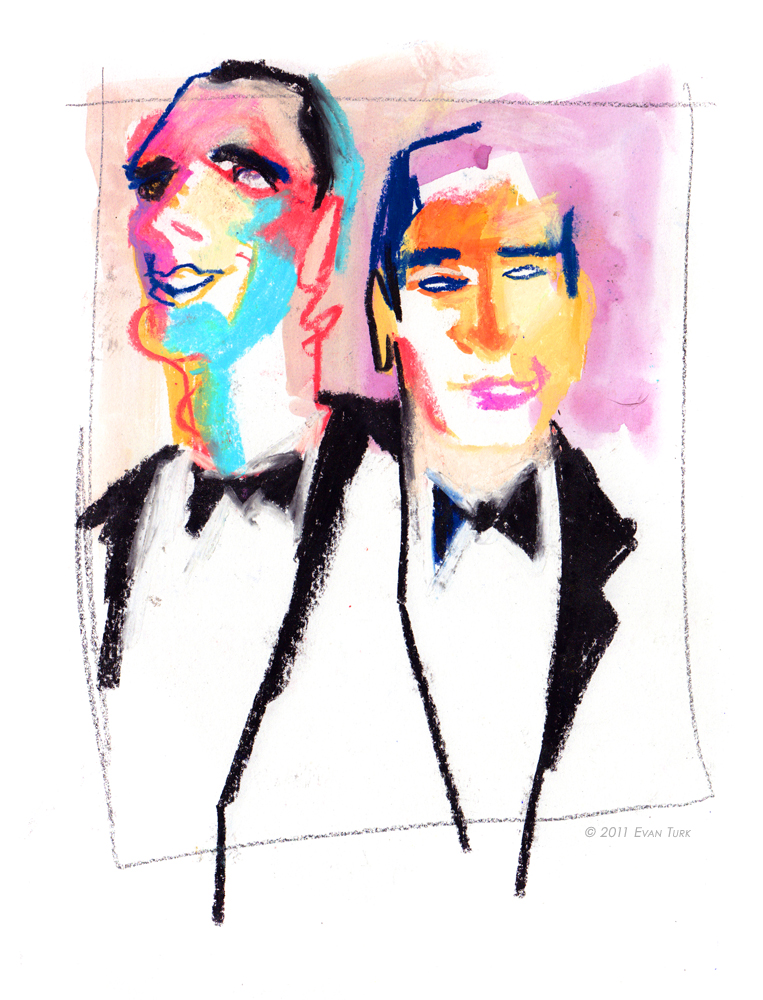 Happy couples would stroll along the small park across the street, posing for photos and stopping for interviews with the never-ending stream of journalists. 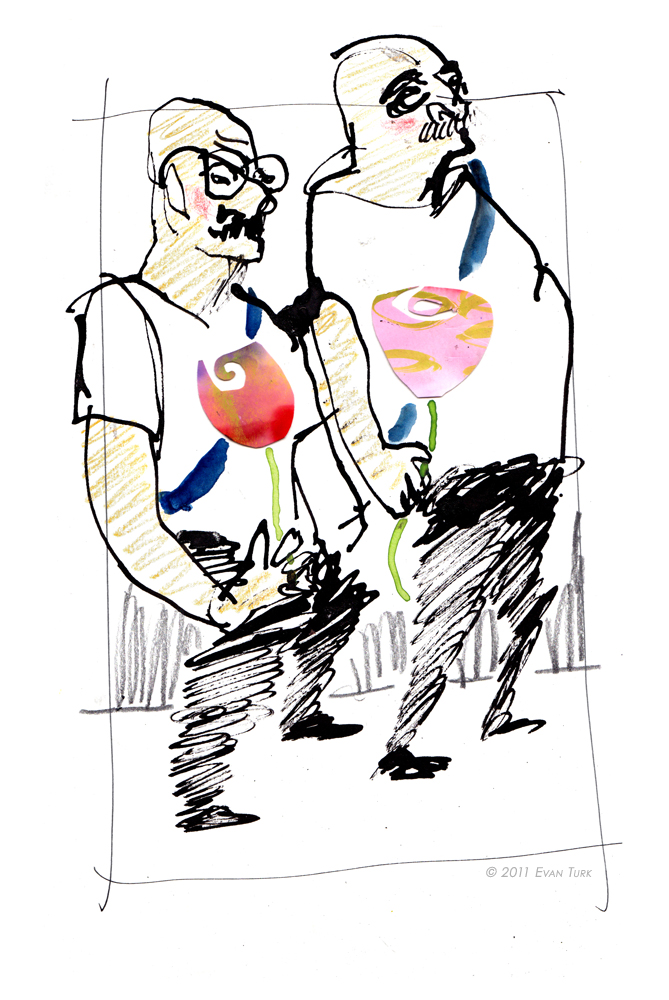 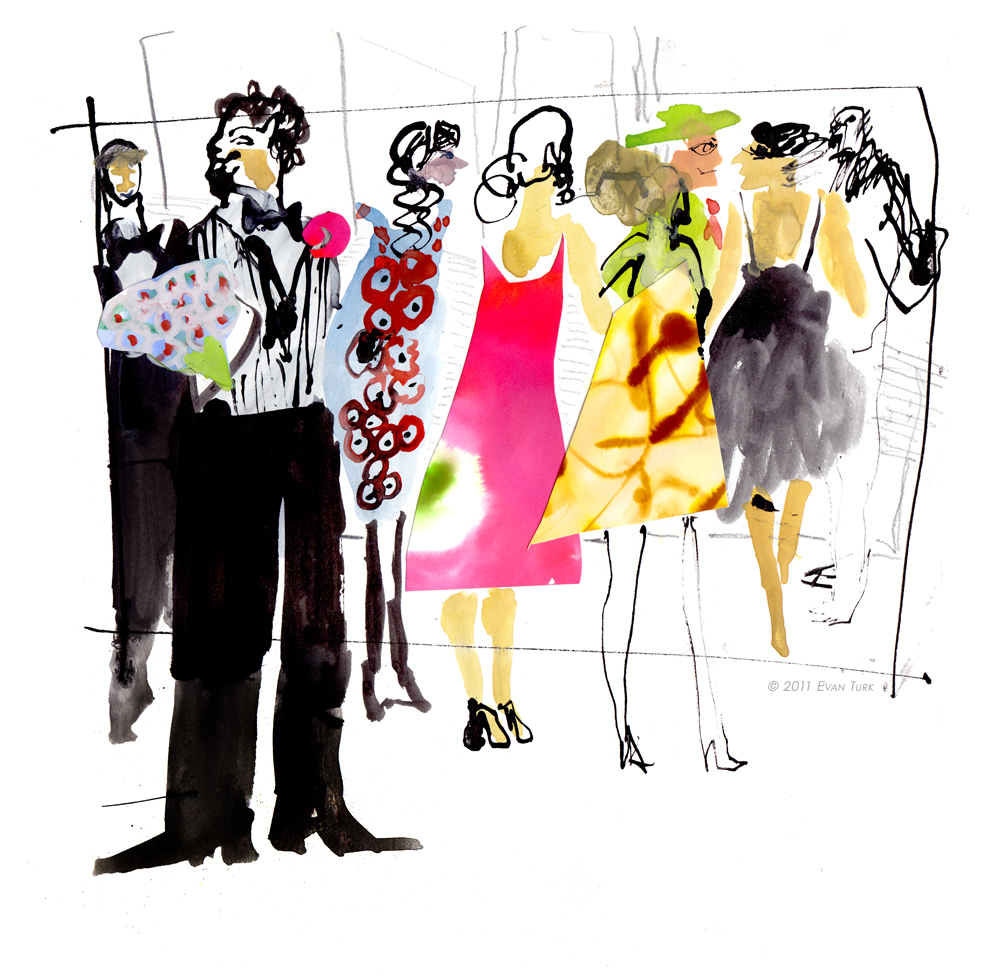 The couples would often wait in line with their entire wedding parties, everybody dressed up in dresses and suits, slowly meandering through the line. 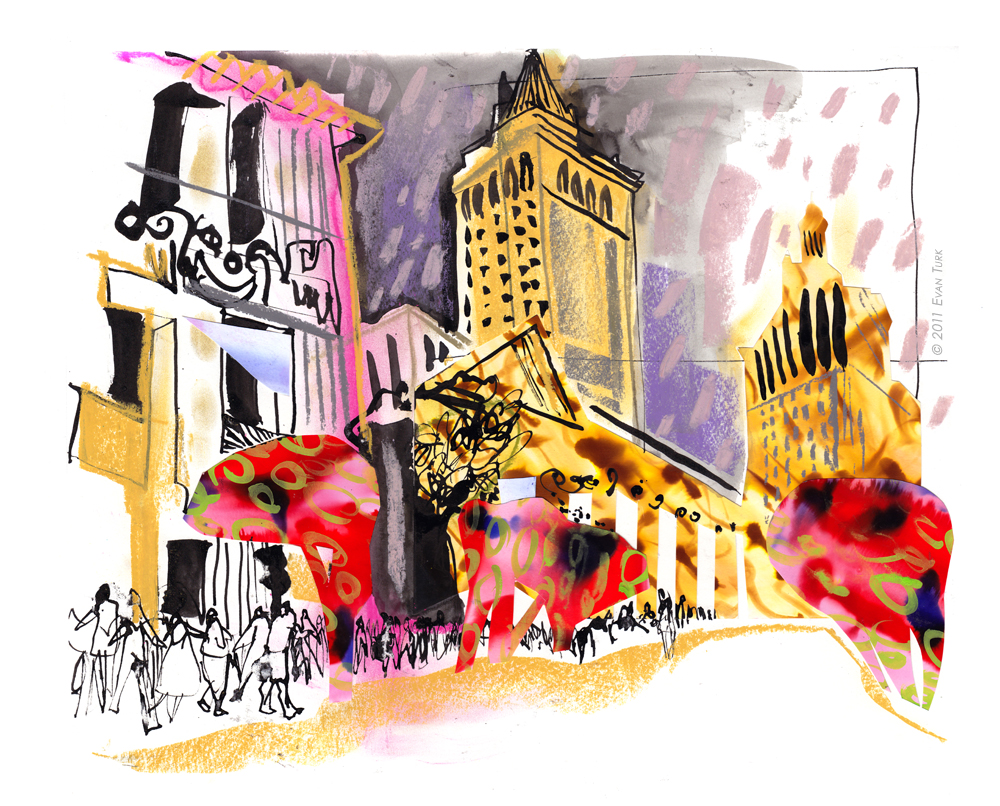